Posted at 00:50h in Network Cabling by admin 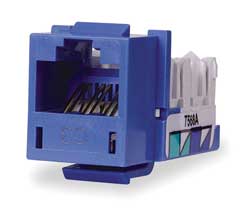 When planning a structured network cabling system having enough of the type of cable that you will be using is obviously important, but also you need to make sure you have enough of the right types of cable connectors too. A cable connector is the component that you attach to the end of a cable so that it can plug into a port or an interface of an electronic system.

The majority of connectors are either male or female gender; the males have one or more exposed pins and the female contains holes for those male pins to insert into. Though some connectors can also be hermaphroditic which are able to connect to a similarly designed connector.

Twisted-Pair cable connectors include modular jacks and plugs and are used by both unshielded twisted pair and screened twisted pair connectors. They are normally a symmetrical shape but they can also be ‘keyed’ which basically means that they consist of a unique shape with special configuration of slots, tabs or pins. Modular connectors were originally designed for telephone wiring, though now how multiple uses and come in three different widths with position configurations of four, six and eight.

Both un-shielded and screened twisted-pair cable are also regularly used with insulation displacement connectors (IDCs) when connecting to punch-down blocks, patch panels and wall-plates. When terminating these connectors the wire isn’t stripped as with screw-down connections, but instead you have to force the connector in-between two facing points or blades that then pierce the plastic insulation to make a contact with the connector.

F-Series Coaxial Connectors are primarily used for connecting satellite and cable television or security cameras. These connectors consist of a central protruding conductor, a ferule that is crimped onto the outer jacket of the cable and a threaded collar to ensure a solid connection.

N-Series Coaxial Connectors are very similar to the F-Series but also have a pin that is fitted over the central conductor and they are weather-proof. Therefore this type of connector is used for backbone applications as well as being suitable for use outside.

The BNC Connector is quick but secure connect and disconnect coaxial connector and is named the Bayonet Neill–Concelman connector after its type of locking mechanism and the inventors of this connector Paul Neill and Carl Concelman. The BNC connector is of a similar design to the F-series with a central conductor and ferule onto the outer shield of the cable, but also has a rotating collar that is designed to securely connect to any female connector on another coaxial cable. 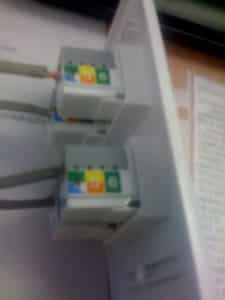 The majority of fiber-optic connectors are ‘male connectors’ or plugs with a protruding ferrule to hold and align the fibers ready for mating with a special adaptor or jack. The two are connected together by bayonet, screw-on or snap-in methods. To be able to transmit data you need two fibers one to send it and one to receive it and fiber-optic connectors are either simplex or duplex designs. The difference is simply how the fiber is terminated and the simplex just terminates one fiber whereas the duplex is capable of terminating two of them.

STs are spring-loaded connectors with a bayonet mount and cylindrical 2.5mm ferrule that is usually ceramic though can also be polymer. They are a popular choice of connector for multimode networking systems, though due to being spring-loaded it is important to ensure that they are seated properly to avoid any loss.

SCs are widely used snap-in connectors due to their excellent performance and only slightly higher price tag than the ST. They also have a 2.5mm ferule like the ST and the snap-in connector simply latches on with a push-pull motion.

FCs used to be the preferred choice of single-mode connectors though it is often now replaced by SCs or LCs. The FC connector also has a 2.5mm ferule that screws on firmly once it is properly aligned.

These are duplex connectors that have both male and female versions. They enclose both of the fibers within a polymer ferrule and have pins for alignment.

These little connectors are a highly popular choice for single-mode connectors and have a good performance. They use a smaller 1.25mm ceramic ferrule that can be easily terminated with adhesive.

Why not let us at Bridge Cable take all hassle out of having your structured network cabling system installed – just give us a call and one of our trained technicians will be happy to help you.