Posted at 23:30h in Network Cabling by admin

So what happens when you hire a liar and thief to work for you?

Strap in folks and I will begin a tale of excuses and lies. No, not a romance novel….sort of love, but for the world of cabling and our business. So let’s begin, I have been warned countless times not to write this blog but it is my hopes to encourage other business owners. Learn from each other and build the best you can….even better!

So currently I have been hiring for a Senior Operations Manager in the Philadelphia area to oversee the techs and our vast projects. Of course it is more of a mindset being a manager but it is hard to train someone. In 2017 I hired a younger promising manager but he was overwhelmed and had to part ways for us. Later another manager was hired but a learning experience was to “watch out” for aspiring or current business owners. Great guy but his direction was never to stay under Bridge Cable’s “flag”.

Enter the latest and greatest manager to date, Demetrius T. McDowell from Philadelphia. I have never hired someone from LinkedIn before and shocked of the results…coming below. So after a few days of back and forth emails and late night phone calls, which in hindsight is odd, we meet a a local diner in Philly. Now keep in mind I have brought people into the office, to job-sites and now trying lunches. Even if the person is not a good fit we both leave with a full stomach. So after a great first meeting which went 1 ½ hours he agreed to join up with Bridge. Smooth move was as we got up to leave the check was brought over and he quickly disappeared to the bathroom. Nice guy….as a point of courtesy when someone pays for lunch at least leave a tip. Courtesy 101 folks.

That was Friday and his first assignment was given. Secure a timeline and plan for a job in Center City Philadelphia that was coming up. It is my belief anyone can talk a great game but you must work to truly show your skills…..or lack of. Demetrius claimed to have experience and the pictures he sent me over plus posted on his website was oddly close to stock pictures. No one I found out with his lack of skill could have done what was shown on the website. Take a look here – https://www.mtgtelecom.com/ and do not mind the dead telephone number as well. I accepted it but understood he might be just building his business….and we all have used stock pictures….not anymore with BridgeCable.com as a sidenote.

I understood I had to train him but as a owner you are hiring a manager for management skills and accounting. Demetrius talked a soild game and proclaimed he was working solely for his elderly mother and to buy a house for her. Soild game plan, I respect a family man….if they are honest. By the way, he said almost “Let me be honest with you Paul” like a bunch of times…….when someone says that….here goes the BS. So back on track and the weekend moved in and I went on a mini-vacation.

Doing the weekend I was thrilled when he brought up another lead for a DAS installation. He was trying to get backing for the project with my knowledge and manpower, insurance, etc. I was just tickled pink…but a true lesson is to focus and dominate one project at a time. Prove yourself first on small tasks and then possibly ask for $8,000 seed money second. 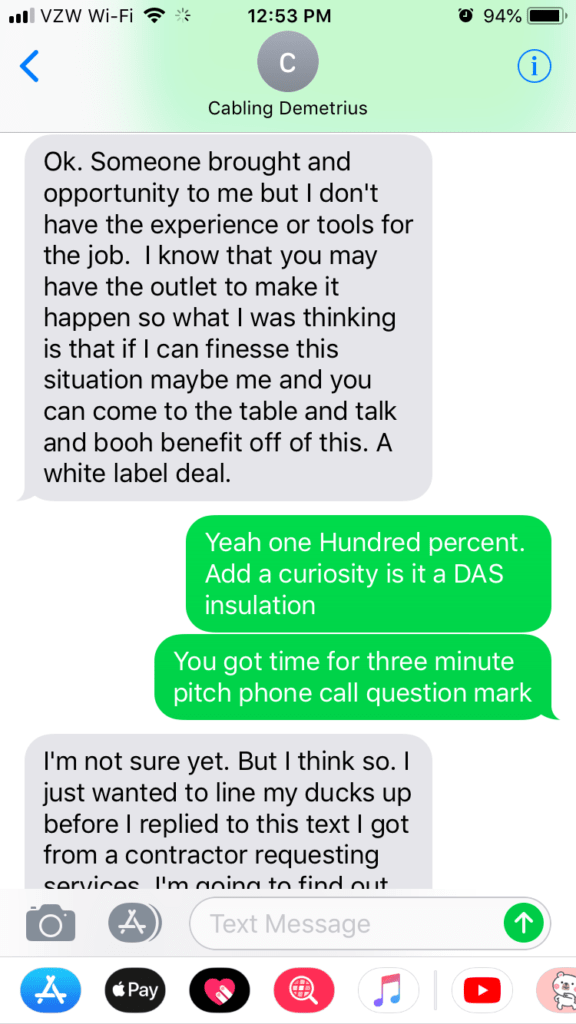 Monday came and he had the task of going to the Permits office with our paperwork and file a permit. Secret….I hate wasting a day with that part of the job…..Philadelphia is brutal. Anyway, Monday came and went into Tuesday. Demetrius claimed to have a “rough weekend”. I know….most people would have blocked his number ASAP. At that time we had several big projects and currently we have a retail fleet of stores we are still engaged in. Manager must fly by their own boot straps…..I was testing him. I believe Weds he mentioned all the paperwork was being processed and he spent $600 of his own money. I was thrilled! Someone that got stuff done and my manager was just slower but worked at his own pace. I told him to show up the next day to work together and see his skills, plus I knew he needed some brush up on his cabling 101 basics. He was a coaxial guy for Hughes but our world of network cabling does not apply to those guys. Weds night he was told to show up at 10am sharp.

10:20am Demetrius rolled up late. Grrrrrrrr….I hate that. “Sorry Paul, I had to drop off my girl first” was the excuse. A manager would plan his day? 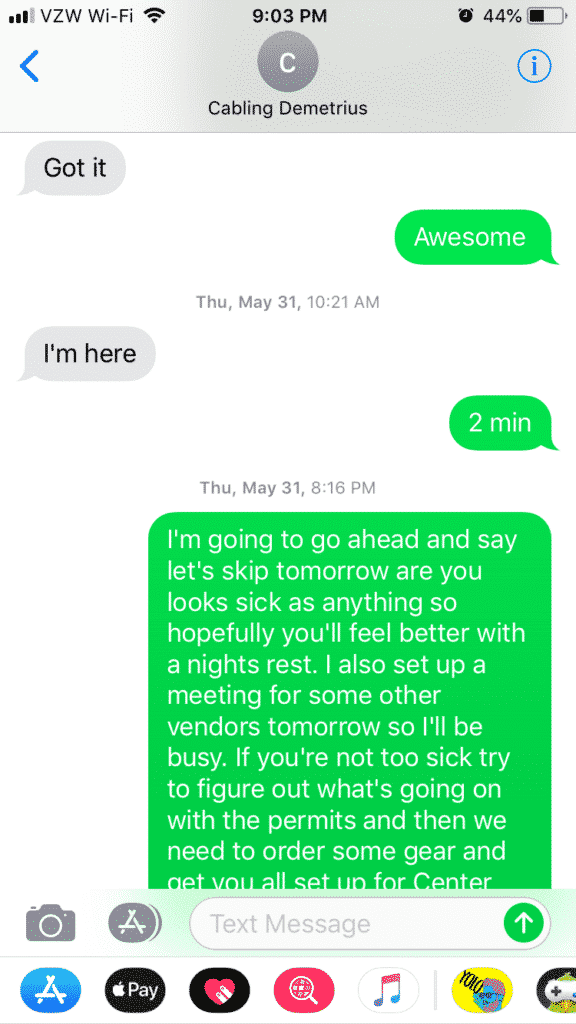 So we get unpacked and gear is rolling into the job site. I turned around and mentioned his windows were down and might want to roll them up. Nope, he brought his dog to the client’s site. A manager would bring his pup and lock her up on a 90+ hot day?

“To be honest Paul, where I live I ain’t supposed to have pets”, again Demetrius smiled from ear to ear. Whatever…time to work.

I had thankfully my summer intern with us for this factory work who happens to be my middle son. I sent a “kid” to do the hard work and sent Manager McDowell to drop 2 wires about 80FT down a drywall location. An hour later I checked on him and he was just figuring out to use a snake. Okay….we all have been there…tough walls. Nope, he did not try a string to the rods with  knot….anyone knows that you pull a string line on a taped rod it’s not going to hold. I showed him a basic knot. When asked to cut a drywall caddy into the wall he admitted no clue. Showed him the ropes. Again, you can teach this stuff and manger’s can be a fast learn. 12:30 and time for lunch, “Paul, I need to have a word with you”. Oy vey. We got outside and he said he had to leave at 2pm. First day and cutting out early. I joked with him that is not right and why bother showing up. He admitted his girl, his words being a 37yr grown man, left her school books in his van. Lunch came and went, brought him lunch and barely a Thanks. Back on the jobsite and this is when the clown show started. He looked tired as hell, like a cold hit him all of a sudden. When asked to jack the network wires I had to show him 5 times. He could not handle the concept of all the wires needing to be flush in the jack. Okay….basic stuff. Wrapping up at 3pm is where my family and friends call me stupid. Here is why.

Wrapping at at 3pm we had a meeting about the Center City job. He stated he was fighting a cold, God knows what what in his black and milds he was puffing away on all day. Anyway, this is where I might seem stupid. I gave him a $300 plus his wages for the day. $300 has to pay back the seed money for the permits which he said he left at home or something. When I drew him a check, I said here is $300 and I rather you screw me over now then later down the road. When setting him up with the next job about $3000 in network cabling and $1000 in j-hooks, assorted gear, ladders, etc. Even my own son said it was a dumb move when we left. Payment and no receipts, with a clearly lazy and inexperienced as a greenhorn.

Here is the kicker, you must trust people. We all move differently and as a business owner you must not mirco manage your people. At the time clearly to much trust was placed in a smooth talking con artist that will be forever living on a couch somewhere. I looked past his past and wanted to give someone a chance. BTW, most states will let you “run someone”, try it out – https://ujsportal.pacourts.us/DocketSheets/CP.aspx

Thursday night came and I cancelled with him to work the following day. He needed to reflect if this job was for him and if he truly was sick then I understand. People speak with their actions. Friday the BS started with a late morning text asking for more money, $1100. At this point it was clear…..”I got to be honest” guy was a liar. I told him to meet up with me to give back the $300….and as you can imagine that day never came. Why would a guy with a unique name trying to start his own business screw someone in the very same business? To be a thief you can make it? You can make it like 1 or 2 jobs….but your clients or lack of them will clearly show you otherwise.

So to wrap up….I seem to be putting all our internal business out there. I want to share for other owners starting their own cabling company even if near me. BE HONEST, DO GOOD WORK…it will pay off. I was talking to our client and even a factory of 100’s, have people playing the games. It hurts as a small business owner since you know the hours it took to build the business. DO NOT give up. The very next week, this week, I hired a beautiful new guy. Even on his first day he wasn’t ask too but worked late. That man was given our uniform and the greatest statement was said, “I’m part of the family now”.

So to wrap up D-Man, he is the very guy that makes our business frowned upon. When a customer asks me to do something odd or against code I say no…with a smile. I have standards and even on this Sunday night I’m hoping to share this experience to build a better community. As well to document what a fraud Demetrius T. McDowell from McDowell’s Telecommunications Group LLC. ( M .T .G . ), Philadelphia, PA is.

Yes….all weekend and Monday came….no $300. At the end only nasty text messages. Later as the a laughable part we returned to the same site. One of the workers said Demetrius stole his knife as well…..I just gave the guy my personal one from my belt and just smiled.

Keep going folks, you are not alone. Provide the best job for your clients…..and then will keep you FOREVER!