Posted at 02:31h in Network Cable Installation by admin

Reusing existing cabling usually works out with some minor work involved as below.

1st Test Out all existing cabling.

Basic testing is fine but we would suggest running full blown cabling certifications on all the wiring.

2nd Replace the patch panel if in bad shape or older.

The one site in Devon, PA right outside of Malvern Area had CAT6 Wiring but the end network jacks were CAT5e Home Depot branded units. Oddly enough the patch panel was a CAT6 ICC brand. So even though the Patch panel & network cabling was CAT6, they slowed down the network on CAT5e jacks. So we switched them out pronto. Due to it being a heavy media driven company we ran the cabling certs as well. 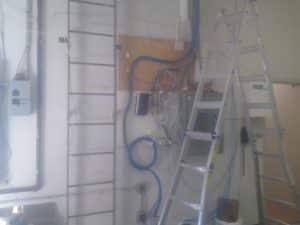 The mess on the Devon, PA site. The terminations had RJ-45 heads on them.

I will also mention more about this Devon site, it was an older building more like a residential job. Closed ceilings made it difficult to run new wiring to some extra locations. Various offices around there like in Wayne and Berwyn all have older “historical” issues.

Closed ceilings have to be cabled either from the ground floor below, cable tray (very expensive) or will to make a few holes in the walls. Thankfully we have skilled senior techs that just made one minor cut and covered it with a faceplate in a hidden area.

So back to reusing existing cabling, there is so much to cover!

Most damage on cables occur at the end locations. Everyone regards the IT closet or protects it but how about under your desk or on the wall. Things in time bang on the ports or the painter down the road might drop some paint into them. Point in case a 3rd floor a port went “bad”. I went right too it with a spare network jack and within 5 minutes I had replaced a faulty jack. Truth be told it was in a factory and the metal contacts were rusted. So back to the end locations….we highly suggest rejacking.

As well your numbering on existing cabling and the new adds might need new labels and faceplates. The 2nd job, which was in Exton, PA had some analog telephone connections in the faceplates they we removed all together. So therefore we had to replace the faceplates anyway, most had dual ports that were removed for singles. 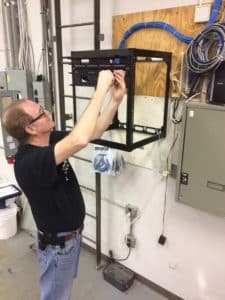 Peter installing some cabling management on the new network rack.

In case we lost you here is a re-cap of the Exton worksite. We first did a site survey and saw the condition of the remaining wiring. At times you can test the wiring but truthfully our Project Managers can tell or have a close guess to its current state just be seeing the panel and a few jacks. Once a seating chart was determined we then added some new wiring, like new office or printer locations.

WAPs or Wireless Access Points, cabling is typically added on most projects. If the client does not have a system in place we always suggest to have it ready when they roll it out. Devon used Aruba and the Exton site used Cisco. 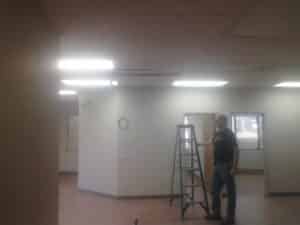 Make sure to include a service loop for WAPS, they might move them.

After running the new cabling, which is always CAT6 for us, we re-terminated the jacks. Again this site had CAT6 wiring but cheap CAT5e jacks. Past lazy network installation techs we would assume. Then with the existing wiring and newer it was punched down into a CAT6 patch panel.

We tested all the cabling with basic tests and then ran our certs. Certs give our clients peace of mind for the site and 100% no mistakes. Upon closing up the site our clients are given a network diagram. We tend to push for cable management and uniformed patch cables. Point of suggestion is always double order, they are cheaper in the long run then a outside vendor plugging in a “whacky” cable. 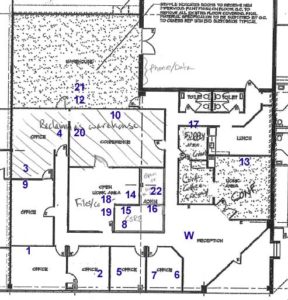 Helps remote IT staff to have network diagram or seating chart.

Moving onward to the next project but wanted to share our thoughts.

Sometimes as well it is more cost effective just to skip re-using all together! Sometimes.