Posted at 15:50h in Network Cable Installation by admin

What happens when the lowest bidder for a project wins your business?Perhaps everything is fine or is just a nightmare waiting to happen?

Albert’s Organics had a new building built in New Jersey and need their entire location wired for their network devices which covered data and voice. The network installation was put up for bid and one company won the bid.

Mar Com Tech LLC based in Indianapolis won the bid. Family run by Gary & Jason Marshall and hires temporary workers. Jason Marshall was quoted on-site saying, “We quoted so high because if we won the job then we would be rolling in it”. Jason also mentioned that the hiring person mentioned their bid was one of the lowest, which in hindsight he wished he put a bigger price tag on the project.

Jason and a out of work friend left their home and worked in New Jersey for a few weeks. When the friend’s wife had issues with him leaving this stranded Jason with the work and a deadline approaching. So what is the point to the background…..this is where the trouble began.

Just because a company might hire another company to do the work, who is actually working for the company. This temp worker made a few fatal flaws.

#2 – Network Jacks with cross wires, these jacks were mis-matched of wiring

Why is this so important? Albert’s network had certain ports that needed to be voice. Without tracing out a entire building with a deadline approaching the ports were made active and un-traced out. Albert’s hubs and switches were Smart, in other words Alberts uses “dumb” terminals for most stations. The smart hubs or switches could handle the cross talk. However the bandwidth and these smart hubs will in time have unnecessary cross talk, thus slowing down the entire network.

Attempts were from another company to fix the mistakes but Mar Com Tech refused to pay their bills and the other company could not finish the repairs.

The Albert’s Organic building in a recap has the following errors and a possible time bomb waiting to happen.

2 – Patch Panel in Server Room is labelled. Causing management and upgrades in the future very tricky to say the least.

When choosing a network installation company please check for the references. Cash poor or family run businesses are not always a problem like Mar Com Tech but beware of low bidders and temp workers. Owners Gary Marshall and Jason Marshall refuse to comment nor pay their help or outside vendors. 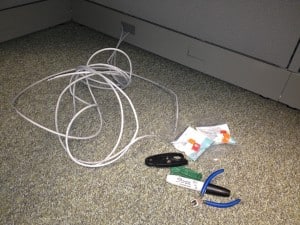 For proper and trained techs on-site to your company call us or visit Network Cable Installation Help and Information.