Posted at 13:45h in Network Cable Installation by admin

So the office is growing and new people are coming in…..that’s GREAT! Time to make sure their network jacks are working or if you have shuffle around some offices or cubes. Most of the time office managers would think installing network cable in these cubes is fairly easy. Most of the time it is! Then….there is some trouble. Not really trouble but TIME.

One would think cubicles are just hollow “fake” walls that you can slid down any wire. Not all the time, with so many different standards and manufacturers you, the installer, can run into issues. Factor in power poles for the electric and even at times the sheer weight of them.

One time we, at Bridge Cable, installed the network jacks and then the cube installers placed the cube walls flush to the outside walls. When the IT people went to plug in the computers they couldn’t budge the cubes and as well couldn’t get to the jacks.

As the name sounds this usually means it brings power the workstations. Typically a empty path or channel is in them to allow for telephone or network cable to be fed down them. Keep in mind as with the picture below, if you “cram” too much down the poles you might strip the jacket on the network cabling or worse…the wiring itself. 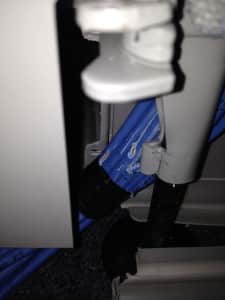 Cubicles have hidden sharp metal edges that might strip your wiring.

Seems simple enough? Just feed the wiring down the power pole and in the bottom and work it to where it needs to be….sometimes. Last month we again run into a problem where there was a blocked pole about half way down the cube’s wall. So give up? Of course not, half the fun with cabling is beating it or finding a new way to get it done! ? 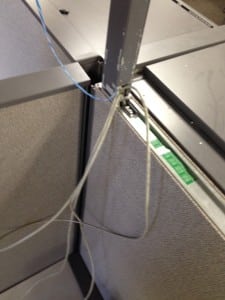 Power pole was jammed up about half way down!

So after feeding some string down the top part of the pole we got stopped right at the top of the wall. We need used our fish to go from the other side that was completely open. Most cube walls are filled with cardboard type of materials so a very easy push. 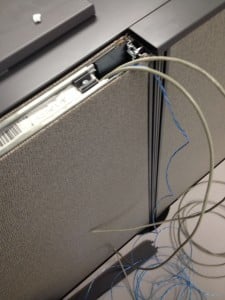 Clear and open path on the other side of the wall.

So then working the pull string and wiring back and forth we were able to feed the network cable into the right paths for the job. Just spending one or two extra hours trying to move the rows of cubes would have not worked either. Typically most cubicle installers will leave a pull string in the power poles but at times such manners may not happen.

Most network cable installation is 90% of the same way or routine as you find. It’s actually the tough or jobs that you actually need to use brain power that are the most interesting! 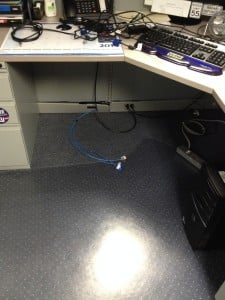 A huge quick tip with mounting the network jacks is too also drill a face plate directly into the kick boards in cubes. Many companies are buying used furniture and most do not come with network jack face plates. Simple fix is just drill out a bit of the metal or plastic and screw in the faceplates. Looks wonderful and very nice fit. Remember to leave some slack on the network cabling for when you need to jack them.

We hope  you enjoyed and get some help with your next project by reading this. Like to hear any other tips to help us all!

Call us for any adds, changes or new installations you might need help with in Philadelphia, New York and or New Jersey. 877-832-1206