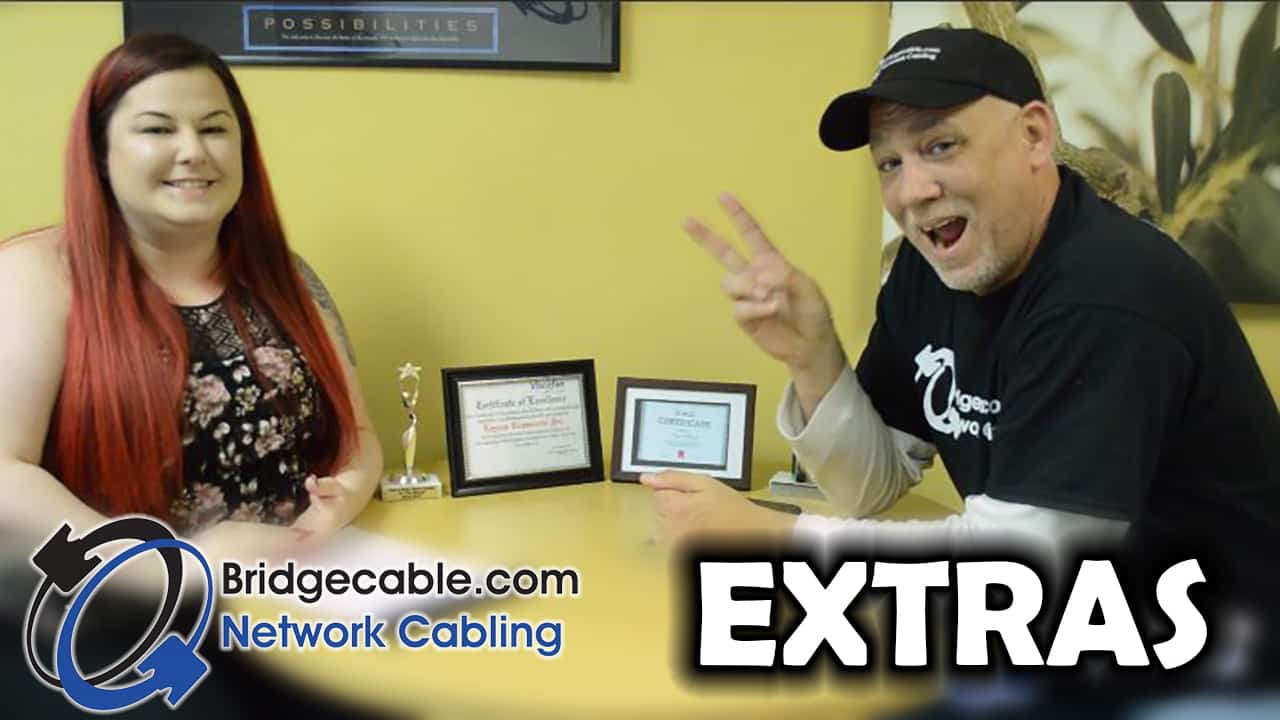 Whether you follow Bridge Cable on any social media platform or you’ve seen our crew first hand, we wanted our clients to get to know the team. On our YouTube channel we have an exclusive Interview series called, “Employee Spotlight.”

In this exclusive series our Project Manager, Victoria, sits down with a featured technician to ask them in depth questions not only about Network Cabling, but also questions to learn some fun facts about them!

As of February 2020, we have five episodes released. Whether the spotlight is on a newer technician or a senior technician, all of the information is vital. Unless you don’t care about their lunch order.

Senior Technician; Door Access Control Specialist. While Vince may seem shy in front of the camera, he is one of the strongest players on the Bridge Cable team. Even though his specialty is door access control, he knows it all! Originating as an Electrician, Vince learned the trade by ensuring that he read a lot and jumping into the work to learn while on the job. His advice? Don’t rush anything. Just take your time and you will get there!

Being a Philly native, Vince always comes prepared. He always makes sure to have snips because they will be needed to cut and splice the cable, a Sharpie is then needed to label the cable and lastly electrical tape is needed in the process of pulling the cable. No matter what type of job site or task Vince is working on, his favorite thing never changes. He loves to see the before and after! Like anyone else, Vince is aware of any danger. Even though he is afraid of heights, he still gets up on those ladders and practices safety! So when Vince isn’t at home watching TV on his time off, he is working above and beyond for all of our clients!

Level 1 Network Cabling Technician. Jhalil got into the business because he wanted to be in a similar trade as his father, who is in construction. When asked what his favorite thing to do is running wires because it is like a puzzle to him. He is not wrong! You do have to play a little bit of Tetris to create the best streets and avenues route for your main bundles and the ones that branch off!

Coming into this field as a newer technician Jhalil had to study hard and pay close attention to everything, especially when it came to safety! The best advice Jhalil had to give to his fellow peers in the same shoes as him, “take in the advice that the older guys give.” Dedication also doesn’t hurt!

But, what if this was an alternate universe, what would Jhalil be doing? Without hesitation, Victoria found out that he would do ballet because he’s “good on his toes.” Hailing from Philadelphia, the most important thing to know about Jhalil is that if you want to treat him to lunch, he will take an 8 piece nugget and a chicken sandwich with American cheese from Chik-Fil-A!

Senior Technician; CCTV Expert. Being with the company since its conception, Bill takes pride that the Network Cabling business is an ever growing profession. Why you ask? It is simple. Bridge Cable originated in 2006. Compare 2020 technology to the technology of 2006; or lack thereof. The technology world is forever expanding and that means that our technicians can continue to learn and apply all the new things there is to offer.

The first thing that Bill made sure that he learned before anything was customer service. Without customer service skills, any business is doomed to fail. Understanding that, Bill knows that having a good rapport with any and all clients will lead to repeat business and even recommendations!

While some may not have this opportunity, Bill’s key advice is to start young as there is a lot to learn in this field! It is also very important to become accustomed to all safety protocols because that can be the most dangerous thing in the field is if someone is not safety conscious.

With so many things to like about what Bridge Cable has to offer, Bill’s favorite is working on service tickets. Whether at a residential or commercial location, it is always something new and can take 15-20 minutes or it can be something that you really have to use your brain to figure out a resolution.

Fun facts about Bill, while at TGI Fridays he drank with Allen Iverson and even met Wesley Snipes during Fat Tuesday in Charlotte, North Carolina. Sounds like he lives his best life!

Level 2 Network Cabling Technician; Brand Ambassador. You could say that Network Cabling is in Ben’s blood. Why do you ask? His father founded the Bridge Cable company! Whether running wires for Ethernet or phone lines, Ben is always hard at work being a second generation cabler! One of the first things his father taught him was to ensure that you keep all wires high up and be careful not to touch the ceiling and do not ride pipes or electrical wires. According to Be, J-Hooks and wire ties are your friends!

On the opposite spectrum, one of the most difficult things for Ben to learn starting out in this field was lining everything up specifically when it comes to RJ45 heads. However, his favorite this is jacking; which he could do all day every day! Speaking of likes, Ben thinks that seeing the live CCTV streams is very interesting!

Senior Technician; New Construction Specialist. Marks dream of becoming a Network Cable Installer started at a very young age. Looking back, he vividly remembers the first time a cable guy came to his childhood home to install their brand new cable. As if a spark lit in his eye, he knew that is what he wanted to be.

Originally getting his start in the business via the union, he is up for any challenge whether it is going to a service ticket, a job that is already in progress or stepping foot on a new job! Of all the things that Bridge Cable offers, Marks favorite is an original; he loves to pull cable! Mark knows that this is the most important thing of any job so he takes pride in it.

Even though snips are a Network Guy’s best friend, Mark wants to make sure that everyone also carries a punch down for your jacks and your patch panels in addition to a flashlight. Think of it this way, would you rather drop a flashlight down a column or your brand new iPhone? Thought so; make that two flashlights you’d want to carry!

Mark may love sports outside of work but while on the job site, it’s not all fun and games. You have to be aware of other trades. This can range from being aware of where everyone is, their tools or their end results (pipes, HVAC or electrical).

You think you know the team? There are a ton of facts both professionally and personally that are still in each episode so be sure to check them out today and stay tunes for more! Call for your next project in the Philadelphia or New Jersey area/locations. 877-832-1206